⚠️ PRE-RELEASE: This is a work in progress - please watch this repo for news.

NetMeta is a scalable network observability toolkit optimized for performance.

Flows are not pre-aggregated and stored with one second resolution. This allows for queries in arbitrary dimensions with high-fidelity graphs.

It captures, aggregates and analyzes events from a variety of data sources: 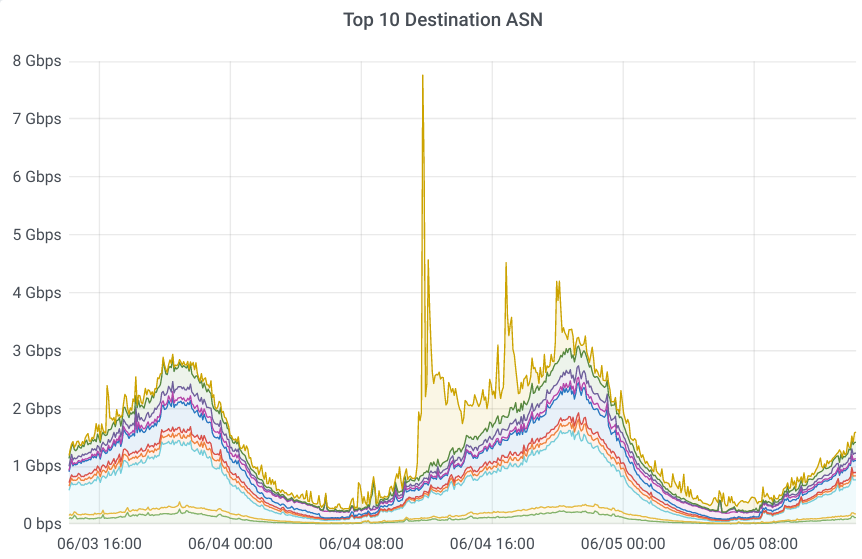 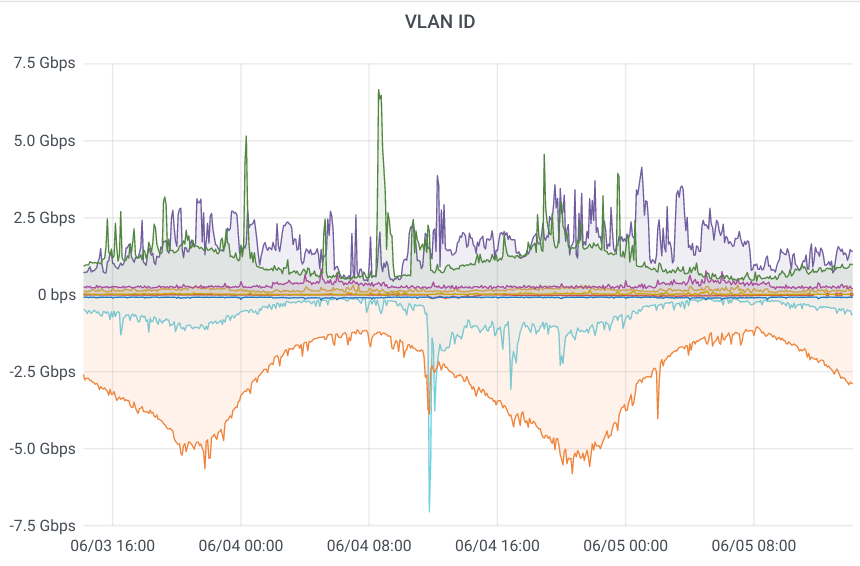 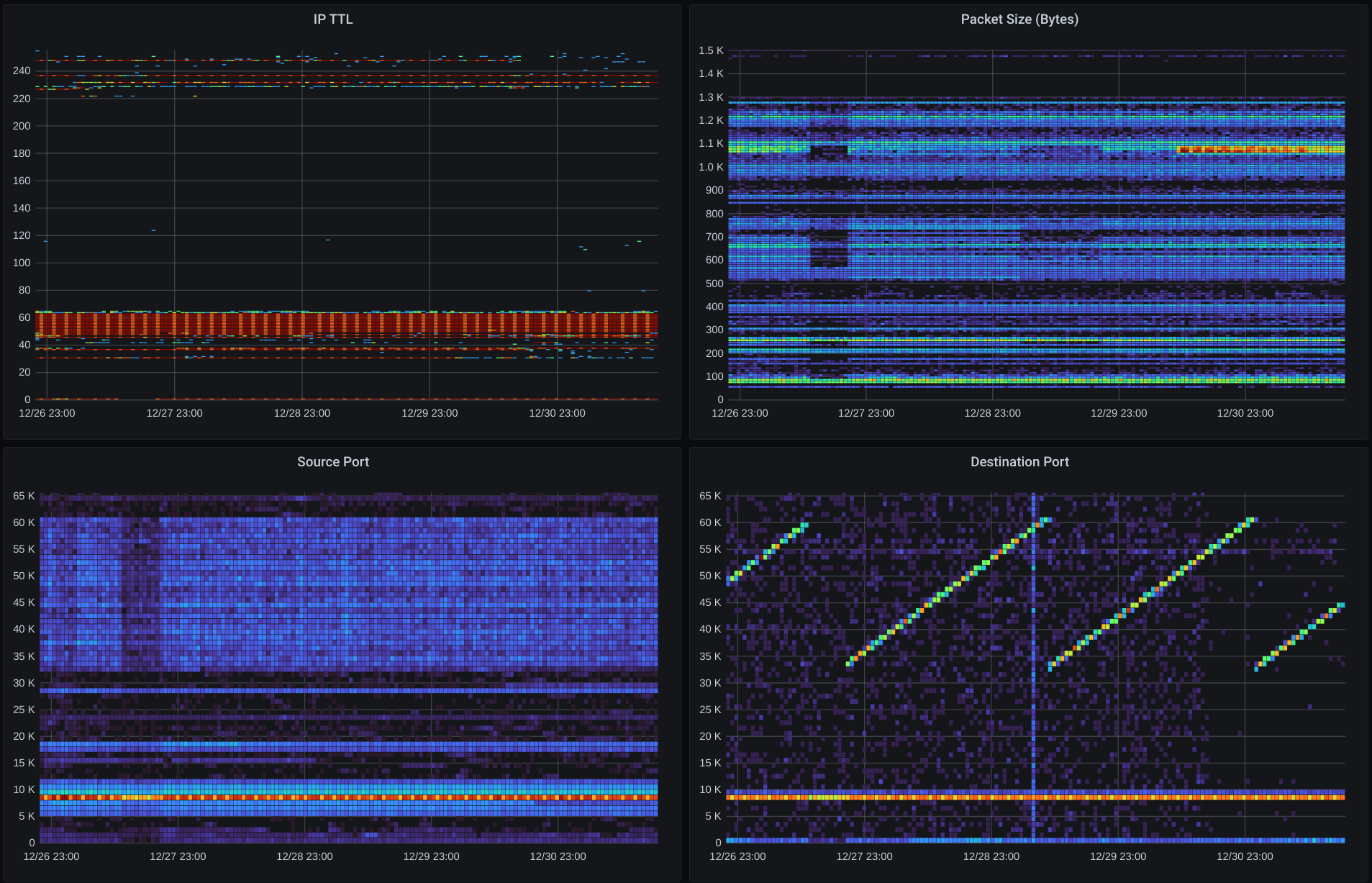 Sampling rate is detected automatically. Different devices with different sampling rates can be mixed. IPv6 is fully supported throughout the stack.

NetMeta is powered by a number of great open source projects: we use ClickHouse as the main database, Kafka as a queue in front of ClickHouse, Grafana with clickhouse-grafana as frontend, goflow as the sFlow/Netflow collector, Strimzi to deploy Kafka, clickhouse-operator to deploy ClickHouse, as well as Kubernetes and Rancher's k3s.

NetMeta is alpha software and subject to change.

Netflow/IPFIX also samples every n-th packet, but pre-aggregates data on the network device, typically identified by its 5-tuple, and exports metadata for all active flows at regular intervals. Netflow aggregation is stateful and the device needs to maintain a flow table. This is particularly useful for use cases that care about individual flows (connections), like network security monitoring. As long as most packets belong to a small number of flows, much fewer samples are sent to the collector at the same sampling rate.

Of course, pre-aggregation means that we lose data about the individual packets. This is fine for use cases like traffic accounting, but has disadvantages for observability:

If possible, we recommend using sFlow. For a 10 Gbps link, a typical sampling rate is 1:2000. A worst-case flood at line rate would generate 7kpps of sFlow samples.

If Netflow/IPFIX is used, make sure to pick an appropriate sampling rate and flow table size for worst-case workloads. There are many different implementations that perform very differently - refer to vendor documentation for specifics.

Depending on your aggregation interval, you may want to set a minimum display interval in the NetMeta config:

NetMeta is alpha software and subject to change. It exposes the following APIs:

One NetMeta has stabilized, these APIs will be stable and backwards compatible.

NetMeta includes a production-ready single node deployment that scales to up to ~100k events/s and billions of database rows.

Most reads/writes are sequential due to heavy use of batching in all parts of the stack, and it works fine even on network storage or spinning disks. We recommend local NVMe drives for best performance.

NetMeta can scale to millions of events per seconds in multi-node deployments.

We strongly recommend deploying NetMeta on a dedicated VM or physical server.

Deployment is designed to be compatible with hosts that are managed by an organization's configuration management baseline. The NetMeta single-node deployment is self-contained and does not touch any of the system's global configuration. Make sure to read and understand install.sh before you run it! It can co-exist with other services on the same machine, but we do not recommend that.

On Fedora >= 32, disable cgroupsv2, which is not yet supported by k3s:

We will eventually provide pre-built images, for now, the build dependencies are always required.

Minimal config for a working installation:

You can run ./example-config.sh > deploy/single-node/config_local.cue to generate a config template with generated random values.

If you use GSuite, configure authentication:

After changing the configuration, run cue apply-prune ./... in deploy/single-node to apply it.

If you receive an incomplete value error, it means that one or more required values are missing. Run cue eval -c ./... to figure out which ones.

We recommend a host- or network-level firewall to restrict access to the server running NetMeta.

The following ports are exposed by default:

Service ports can be changed in the node configuration (see above).

All services except for NetFlow/IPFIX/sFlow are authenticated.

If you disable public access to the frontend web server, Let's Encrypt certificate provisioning won't work and you'll have to configure a static SSL certificate.

The flow collection protocols have no authentication and are vulnerable to DoS and flow data spoofing - we recommend you restrict them to internal networks.

You also need to allow internal traffic on the host:

This assumes a default firewalld config with "public" as your default zone.

Create a new zone for the cni0 interface and allow internal traffic:

You need to create iptables (or nftables) rules that send samples to hsflowd's nflog group. An example config for plain iptables looks like this:

For Linux hosts, there's a custom agent on the roadmap that directly pushes to Kafka to avoid the sFlow detour and get better data that includes the flow direction. In the meantime, hsflowd is your best bet for collecting samples from a host.

NetMeta works on any Kubernetes cluster that supports LoadBalancer and Ingress objects and can provision storage. It's up to you to carefully read the deployment code and cluster role assigments to make sure it works with your cluster. Note that we use two operators, which require cluster-admin permissions since CRDs are global (Strimzi for Kafka and clickhouse-operator).

All pieces of NetMeta are installed into a single namespace. By default, this is default, which is probably not what you want. You can change the target namespace in the deployment config.

Please contact us if you need help porting NetMeta to an existing k8s cluster. 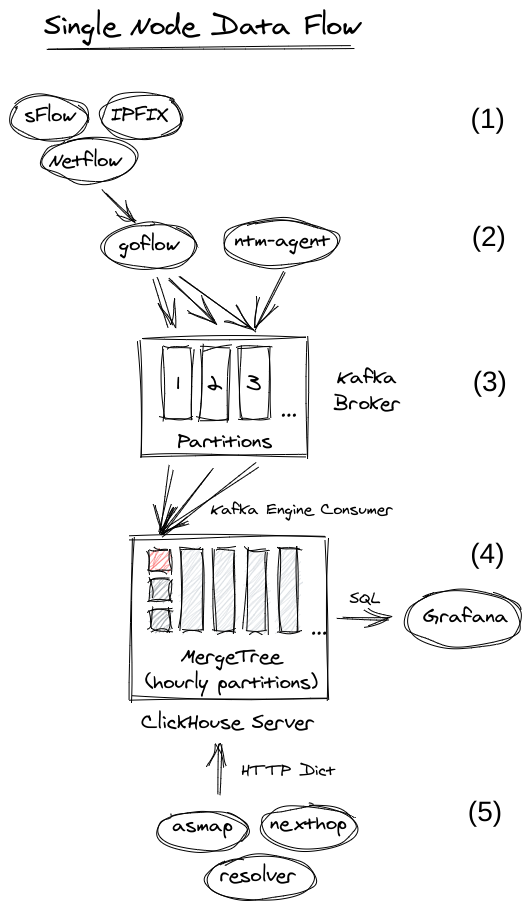